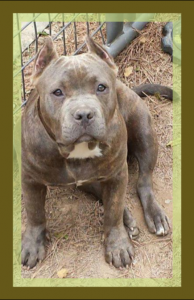 Breed Specific Legislation – a blanket term for laws that either regulate or ban dangerous or potentially dangerous breeds completely in the hopes of reducing dog attacks. Many municipal governments have enacted breed-specific laws (for example, it is illegal for a person in Miami-Dade County, Florida to own or keep a Pit Bull), and many private entities, such as rental property owners, have adjusted their policies to prohibit breeds they believe to be dangerous. Identifying and addressing these breeds has resulted in some contentious debates between dog lovers and those making the laws/rules. How does one decide which breeds are dangerous? Just because some of one breed have attacked, does that make them all a safety threat? Is the ability to become vicious inherent in some breeds, or is it brought to the surface in the way they are raised by their human? Isn’t banning an entire breed based on the actions of a few discriminatory?

Can They Do That?

In May, all of these questions came into play when a corporate-owned luxury condominium in Manhattan informed its residents they must prove the breed of their pooches either by way of a veterinarian’s written statement (including percentages of each breed in a mixed pooch), or a doggy DNA test. According to the corporation’s spokesperson, the policy was designed to eliminate from the building any breeds they deemed “troublesome.” And their list of “troublesome” breeds includes many more breeds than the typically targeted Pit Bulls and Rottweilers; it ranges from pint-sized Pomeranians to super-sized Saint Bernards. If a resident dog is found to possess more than 50 percent of an outlawed breed’s DNA, it will be evicted from the building. As you can imagine, the pet parents who reside in the condo are barking mad, calling the policy “intrusive,” “offensive,” and “dog racism.” A group of them are even considering a formal protest.

The answer is no, according to the ASPCA and many others. Research has found no evidence that suggests breed-specific laws result in safer communities for people or pets. For example, Maryland’s Prince George County spent in excess of $250,000 per year enforcing its ban on Pit Bulls. A County study on the ban’s effectiveness found public safety was not improved as a result of the ban, and that any transgression committed by a dog was already covered by another non-breed specific portion of their Animal Control Code. The ASPCA’s research also found unintended consequences of breed-specific bans:

Thousands of pet parents across the country have been working to ban Breed Specific Legislation. There’s even a petition to end the legislation circulating on the Petition2Congress website. If you’re interested in joining the cause, or simply want more information regarding the law, please visit http://www.petition2congress.com/5200/stopend-bsl-breed-specific-legislation/.